Colosseum - For travelers making their way through Italy, the Colosseum is a must see. This huge Amphitheater is the largest of its kind ever built by the Roman Empire and has remained a model for sports facilities right up to modern times.

Today the structure stands in stark contrast to the modern development that surrounds it, and is a prominent reminder of ancient times and the extensive history of Rome. 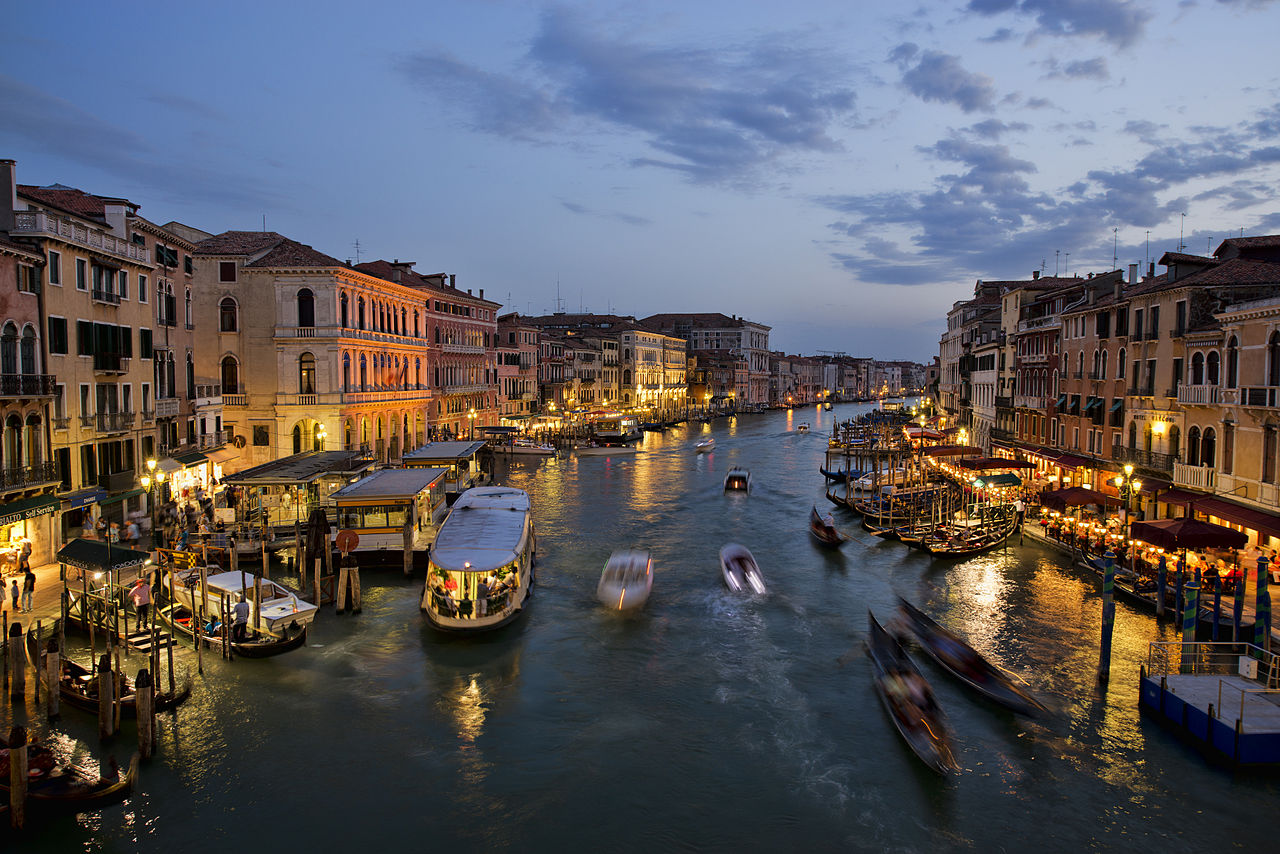 A gondola ride through the canals of Venice is a tradition that travelers have been participating in for centuries. Venice is a city of islands and the canals have long been, in many ways, the city's streets. Lining the canals are the old buildings which have remained relatively unchanged for hundreds of years, adding to the romantic charm. The Grand Canal is the most famous of these waterways and one of the most photographed sites in Venice.

Below the rumbling volcano of Mt Vesuvius stand the ruins of Pompeii, an ancient Roman city preserved in time by the eruption in A.D. 79. Excavations have revealed the remains of houses, markets, baths, temples, theaters, streets scarred by the tracks of chariots, and human remains. Visitors can tour the site, walk along the old streets, and see the engineering used by Romans over 2000 years ago.

The Leaning Tower of Pisa is actually just one of many attractions in the city of Pisa, but its fame, gained from its flaw, is world renown. Work began on the tower in the 1100s and the sinking, which led to the lean, began by the time the tower reached the third story. Prior to restoration work in the 1990s, it was predicted to topple over by the year 2000. Today, visitors can climb up the stairs of the tower for a fabulous view over the city. The Leaning Tower, also known as La Torre Pendete, stands on the Piazza del Duomo.

Lake Como is one of Italy's most scenic areas, surrounded by mountains and lined by small picturesque towns. Traditionally a haunt of the wealthy, the lake has many old opulent villas and palaces. Around the lake are resort communities and an 11th century abbey. The mild climate is also a draw for tourists, with characteristics similar to that of the Mediterranean. The Amalfi Coast, a UNESCO World Heritage Site, is a stunning stretch of coastline along the Sorrentine Peninsula. Hillside towns are built precariously along the steep mountains that cascade down to the sea. One of the main towns along here is Positano, but the entire area is popular with tourists.

Regarded as one of the finest cathedrals in the world, the Duomo Santa Maria del Fiore, or the Cathedral of Santa Maria del Fiore, dominates the Florence skyline. The cathedral was built between the 13th and 15th centuries, with the most famous piece being the extraordinary dome, completed by Filippo Brunelleschi in 1434. The Belfry, standing 82 meters, can be climbed. A total of 414 steps lead up to a viewing platform with fantastic views of the city.

Cinque Terre, which translates as "Five Villages", is a lovely coastal region with steep oceanside cliffs and hills. The picturesque villages of Monterosso al Mare, Vernazza, Corniglia, Manarola and Riomaggiore can be reached by several means, but are only joined to each other by a scenic narrow road through the hillside, or walking trails. Many travelers choose to hike between villages to truly enjoy the landscape. The small towns have maintained a feel of old world fishing villages and offer a sense of remoteness. 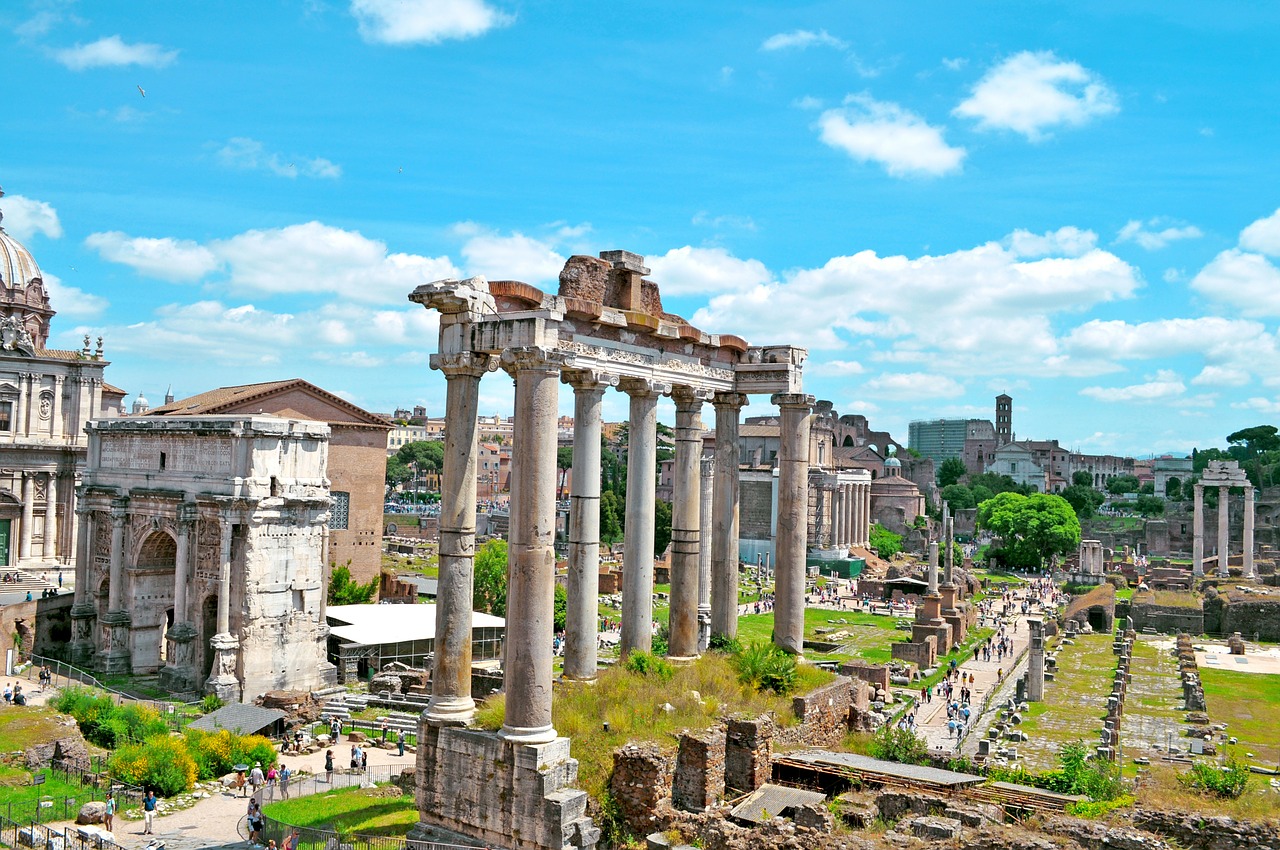 The Roman Forum may require a little imagination to understand exactly what this area once looked like. However, its historical significance as the heart of the Roman Empire cannot be overstated. Pillars, partial structures, and foundations of former temples, market halls, courts, and public buildings pay tribute to Ancient Rome, which stood here for a thousand years.

One of the most important tourist sites in Venice is St Mark's Basilica. Most visitors wandering around Venice will find themselves in the famous square, Piazza San Marco, in front of the basilica, looking at the main west facing facade. The cathedral contains a vast treasure of artworks, but the building itself is also a work of art, with a mix of architectural styles.

The Pantheon, an exceptionally well preserved remnant from Roman times, reveals the incredible architectural achievements of the Roman Empire. The precise proportions of the building, with the height equal to the diameter, and a single beam of light penetrating the room from the top of the dome, give the room a unique character. Italian Kings and other great Italian influencers are buried in the Pantheon.